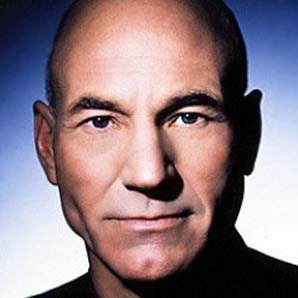 One of England’s most loved actors Sir Patrick Stewart was born in Mirfield, Yorkshire, on July 13, 1940. His father was a career soldier; his mother worked in industrial weaving. Because Mirfield, a river valley settlement of some 12,000 people, had a rich culture for a provincial town of its size, Stewart’s stage experience started early. His involvement was encouraged when, at the age of twelve while in secondary school, he enrolled in an eight-day drama course, where he met some professional people who were very influential in his life.

Now an internationally respected actor known for successfully bridging the gap between the theatrical world of the Shakespearean stage and contemporary film and television, Sir Patrick Stewart continues to demonstrate his versatility with a wide range of upcoming projects.In 1996, in honour of his work on the stage, Stewart received the prestigious Will Award from The Shakespeare Theatre in Washington, D.C. The Honour is given annually to an individual who makes “a significant contribution to classical theatre in America.” That same year, Stewart also won a Grammy Award for his narrative work on the Best Spoken Word Album for Children, Prokofiev: Peter and the Wolf.

In 2001 New Years’ Honour list, Her Majesty Queen Elizabeth conferred on Stewart the Order of the British Empire (O.B.E.).