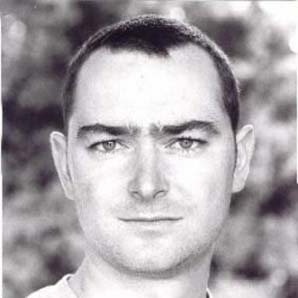 Sean McCann teaches improvisation at Oxford School of Drama, East 15 and the London Film School. He has worked for The Sticking Place since 2004, appearing in the Terror Seasons at the Union Theatre.

Sean worked extensively with Ken Campbell, appearing in Shall We Shog? (Globe Theatre), Decor Without Production (Royal Court), In Pursuit Of Cardenio (Edinburgh Fringe). Sean is a founder member of Ken Campbell’s School Of Night, perfoming Hard Bardic Extemporization at venues including The Latitude Festival, Drill Hall, BAC and Hay Festival for BBC Radio. He has appeared in the 50 hour Improvathon, and at Shakespeare’s Globe, The Royal Court, Edinburgh Fringe, Hay Festival for BBC Radio, Latitude Festival, and the King’s Head Islington, as well as the Terror Seasons at the Union Theatre. He is a four-time veteran of the Die Nasty 53-hour Soapathon (the world’s longest Impro show), and a two-time veteran of the 50-hour London Improvathon.