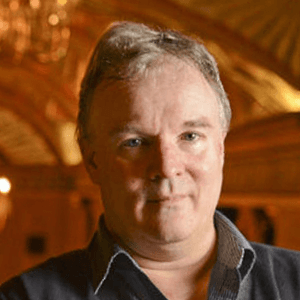 Jeremy Sams is a British director, writer, translator, orchestrator, musical director, film composer,and lyricist. Sams studied Music, French, and German at Magdalene College, Cambridge and piano at Guildhall School of Music. Early on he worked as a freelance pianist and coach, giving frequent recitals and tours and doing stints as a repetiteur at opera houses in Brussels and Ankara.

Sams came to prominence as a director with a revival of Michael Frayn’s farce Noises Off, which he mounted in London’s Royal National Theatre in 2000. This production then transferred to the West End, and then to Brooks Atkinson Theatre on Broadway in 2001. Among his other directing credits are the West End musicals Spend Spend Spend (1999), the story of Viv Nicholson, who squandered a fortune won in the British lottery, and a stage adaptation of the film Chitty Chitty Bang Bang, called simply Chitty the Musical (2002), starring Michael Ball, for both of which he received Laurence Olivier Award nominations; the 2002 Broadway production Amour, which he translated from the original French libretto by Didier Van Cauwelaert. His efforts earned him two Tony Award and two Drama Desk Award nominations. His directing credits also include Jason Carr and Gary Yershon’s musical of The Water Babies at the Chichester Festival Theatre in 2003.He directed the Jason Robert Brown Broadway musical 13 at the Bernard B. Jacobs Theatre, on Broadway.

Sams’ many translations include plays by Botho Strauß; Mozart’s The Marriage of Figaro, La Boheme, The Magic Flute and Wagner’s The Ring Cycle for ENO; The Merry Widow for Covent Garden; Les Parents Terribles, The Miser and Mary Stuart for the Royal National Theatre; and The Threepenny Opera for the Donmar Warehouse. Sams’ composing credits include the BBC film of Jane Austen’s Persuasion, for which he won a BAFTA award for Best Music. Other scores include The Mother (2003) and Enduring Love (2004). Sams has written, arranged, and directed music for some 50 theatre productions, including The Wind in the Willows and Arcadia (RNT) and The Merry Wives of Windsor.