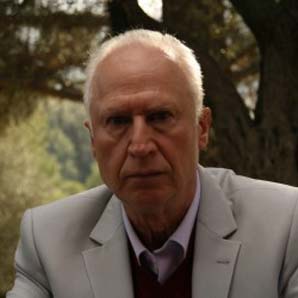 Alkis Kritikos worked as an Actor at The Connaught Theatre Worthing, The Royal Court Theatre, The Half Moon Theatre, Theatro Technis, The Yvonne Arnaud Theatre, The Thorndike Theatre, The Oxford Playhouse, The Belgrade Theatre, The Library Theatre Manchester, The Sheffield Crucible, The Place Theatre, and The Shaw Theatre (West End) – where he played the lead part of Esteban Trueba in Isabelle Allende’s The House Of The Spirits.

Films include: For Your Eyes Only, A Woman for All Time, Black Sheep, Romeo of the Spirits, Red Thursday nominated as Best Supporting Actor at the Thessaloniki Film Festival), Akamas (Shown at the Venice Film Festival, and won The Best Narrative Feature award at the Los Angeles Greek Film Festival in 2007), Legend of the Golden Fish Cake, Dogs, Cats And Rats (2010-2011), and most recently Father Cyclop in Wrath Of The Titans in 3D (2012), directed by Jonathan Liebesman for Warner Bros pictures.

Alkis Kritikos has also worked extensively on Television, including: The Cuckoo Waltz, One Chance in Four, Sexton Blake, Connie, Watch All Night, The Dark Side of the Sun, Rockliffe’s Babies, Thin Air, Vote for Them, Rumpole of the Bailey, the Gingerbread Girl, and the title role in The Greek Interpreter in the series The Adventures of Sherlock Holmes. Most recently he played Nikitas a lead role in LIMNI (The Lake), a 45 part TV series for RIK The Cyprus Broadcasting Corporation (2010-2011).

He made his directing debut with Tennessee William’s in In the Bar of a Tokyo Hotel at The New End Theatre, followed by Miss Julie (Sir Richard Steele), The Collector (Argonaut Theatre Company), Beckett’s Theatre I and II (British Premier and National Tour), In Other Beasts The Best (devised piece on Greek Myths, Theatro Technis), Debbie Issit’s The Woman Who Cooked Her Husband and Lee Blessing’s Two Rooms (London Repertory Company), the Musicals An Evening with Carmen Miranda by Carmen Gomez (Jermyn Street Theatre), and Sharp Practice at the Wimbledon Studio Theatre. Alkis has also directed for The National Theatre of Cyprus (THOK), Moliere’s Tartuffe in Cyprus and The Frog and The Lionfairy in the UK, and The Dinner (To Gevma) at the Skala Theatre, Cyprus. Alkis Kritikos spent a year at the Royal Court where he assisted on productions by David Hare, Stephen Frears, Athol Fugard and with Jim Sharman on the original production of The Rocky Horror Show. He has also taught at a number of Drama Schools, and has been a Tudor/Director for theatre design students at The University of the Arts, Wimbledon.Other Directing work includes the critically acclaimed cult hit musical All Cloned Up by Mike Bennett, which enjoyed runs at the Bloomsbury and Westminster Theatres (London West End), Wimbledon Studio Theatre, The Latchmere, a 4 week season at the Edinburgh Festival, and off West End at the Kings Head Theatre. All Cloned Up was also the chosen gala performance for the Athinorama Greek Theatre Awards in Athens, also Roast Beef at the Riverside Studios in London, as part of The Greek Cultural Olympiad. He recently directed the World Premiere of the Glam Rock Musical Blok Busta (GlamBusta), at the New Players Theatre in London’s West End.