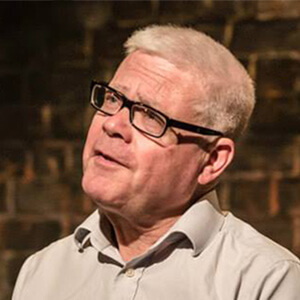 Stuart Pedlar studied Organ, Composition, and Percussion at the Royal Manchester College of Music, where he was awarded the Edward Hecht Prize for composition. He was Organist and Master of the Choristers at St Mary’s Bowdon and Music Critic on the Manchester Guardian until 1972. He was Musical Director and founder member of Nucleus Opera, and joined the staff of the Royal College of Music in 1980.

Stuart was the assistant Musical Director on the original London production of A Little Night Music (1975) and the M.D. for Side by Side by Sondheim from its conception to productions in the West End, New York, Canada, Middle East, Far East, Denmark and Sweden. He has since been the M.D. for the tenth and twentieth anniversary productions (at the Donmar and Jermyn Street Theatre respectively).Further M.D. credits include the original production of Sweeney Todd (1980, Drury Lane), the European premiere of Into the Woods (Denmark, 1989 and Sweden 1991), Scrooge (for which he also co-wrote the orchestrations and made the vocal arrangements at various theatres including the Dominion Theatre, 1996-1997, the London Palladium 2005-2006 and 2012-2013, as well as supervising other productions worldwide) and Dr. Dolittle (UK tour, 2007-2008).

He was M.D. for Cole (Hong Kong), Chicago (Edinburgh), Once Upon a Mattress (Belfast and the Watermill), Private Lives, Time and the Conways (Greenwich), A Tale of Two Cities (Windsor and Birmingham), Lend me a Tenor, Happy as a Sandbag (The Mill at Sonning), A Winter’s Tale (Watermill), and Annie (Lincoln).

Stuart was the M.D. for the National Tours of Oklahoma!, South Pacific, Ken Hill’s Phantom of the Opera, Snoopy, Happy as a Sandbag, Sherlock Holmes and of course Scrooge. He arranged and orchestrated Singin’ in the Rain for the West Yorkshire Playhouse, which transferred to the National Theatre and then toured the UK.

Stuart has also been an M.D. for various productions at RADA, The Mountview Academy of Performing Arts and The Guildhall School of Music and Drama. He was a reader for the Vivien Ellis Awards and lectured for them at London University and has also worked as M.D. for two Summer Courses at the Royal Academy of Music – as well as being Patron and honorary member of the Stephen Sondheim Society.