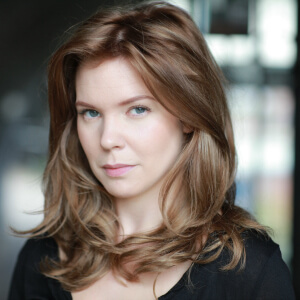 Natalie Burt is an actor, author, writer and director. Her most recent acting credit was playing Lily in As Is at Trafalgar Studios. In the ten years since graduating from Guildford School of Acting with a First Class BA Hons, her career has been varied and challenging.

Her credits include:(Television): Cressida in Channel 4’s Scrotal Recall, Pandora in BBC1’s Blandings opposite Jennifer Saunders and Timothy Spall, Marion Bent in the BBC film United directed and written by Broadchurch’s James Strong and Chris Chibnall, Jenny in ITV’s Breathless and numerous guest appearances in shows such as Toby Whithouse’s Being Human as well as Holby, Channel 4’s Coming Up and Doctors.

Since her professional theatrical debut in 2006 in The Deep Blue Sea at Exeter’s Northcott theatre she has enjoyed many theatre projects including: Elspie in The Glass Cage, Jenny in The Prime of Miss Jean Brodie and Dorothy in The Wizard of Oz – all at Northampton Royal & Derngate, Sasha in Alan Ayckbourn’s Sugar Daddies, Irene in Richard Bean’s Honeymoon Suite, Caroline Bingley in the Theatre Royal Bath’s tour of Pride and Prejudice, Merry in First Light – which played at the Edinburgh Festival and later transferred to the Kings Head in London – and Lady Anne in Richard III at Nottingham Playhouse. She also works in voiceovers and, amongst numerous other projects, has created the role of Dr Sally Armstrong for Big Finish’s audio series Doctor Who: Dark Eyes opposite Paul McGann’s Doctor. As well as being an actor Natalie is also an author – her first book Acting: Cut the Crap, Cue the Truth was published by Oberon Books in 2014 and her second title To Be Or Not To Be An Actor is due for publication in the autumn of 2016. She also writes and makes film and after recently completing a part time course with Met Film School at Ealing Studios, she has now completed her first short, Loose Ends, which is set for the festival circuit.